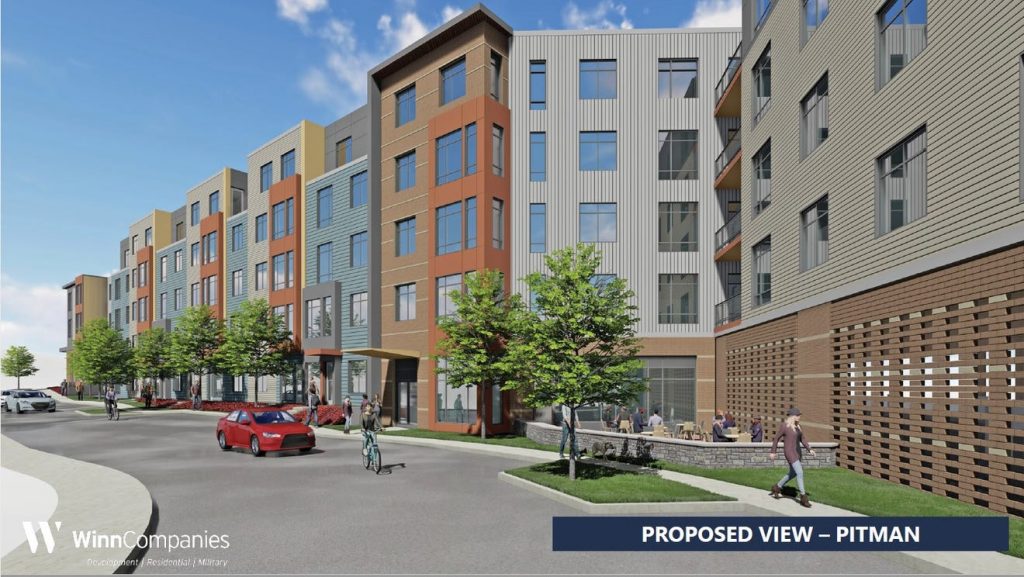 Dozens of worried residents shared their concerns about a proposed 128-unit apartment complex at 21 Elm Place in Swampscott during a virtual neighborhood meeting moderated by the town the evening of Thursday, Jan. 21.

“I’m a lifelong Swampscott resident and care deeply about my town,” said Elizabeth Pappalardo. “Many of us feel that there’s overdevelopment going on, overcrowding, and we feel that we’re bursting at the seams.”

WinnCompanies presented its plans for the five-story apartment building and its mix of affordable housing (64%) and market-rate apartments. Most units are studio or one-bedroom apartments, but there are some two- and three-bedroom options.

As an example of pricing, a one-bedroom apartment would run from $580 per month to $2,061, depending on the renter’s income level.

‘This project should be dead on arrival’

The complex will include 109 parking spaces, mostly under the building. There is also street parking for residents on the first floor. Parking and increased traffic are big concerns among neighbors.

“You’re adding 100 cars entering and exiting a property that abuts the high school basically, “ said Jeffrey Blonder. “Without a serious mitigation of traffic concerns, this project should be DOA (dead on arrival).”

“The amount of parking proposed isn’t going to work,” added Gerry Perry. “It’s going to put an incredible amount of stress on the town. I think you have to get creative.”

Winn did hire a consultant to do a traffic study, which hasn’t been released. But neighbors encouraged the town to do its own study.

Blonder also pointed out that this would be the first five-story building in Swampscott. “I’m not sure if fire trucks can reach those people,” on the top floor.  “And the density —  I’m very concerned about this.”

Maura White, who lives at 26 Elm Place, is worried about drainage in the area.

“I’m an abutter of Burke’s Academy,” she said. “The sewer can overflow. Water overflows and backs up. This is a huge, huge issue — like parking and traffic. I’m afraid.”

The 1.6-acre parcel of land, worth $1.6 million, is owned by local developer Bruce Paradise.

Resident Anne Driscoll asked Paradise what he thinks about the project.

“You are a neighbor and lifelong resident,” she said. “You have a great reputation in town. What impact do you think this project will have on your hometown?”

To help design a building that will fit in better, Winn has hired local architect Robert Zarelli.

“There are improvements we can do that make the building feel more Swampscott, New England, coastal,” said Matthew Curtin, a WinnDevelopment vice president overseeing the project. “We’re not only actively working on it, we will get there. It’s in our means.”

Curtin shared Winn’s timeline from there.

“We hope to get our 40B (affordable housing) permit in the spring and start construction in 2022,” Curtin said.

The 40B units would help boost the percent of affordable housing in Swampscott, which is 3%, well under the state-mandated 10%.

State law defines affordable housing units as housing developed or operated by a public or private entity and reserved by deed restriction for income-eligible households earning at or below 80% of the area median income.

“Further, the trust has voted to commit an initial $50,000 in trust funds to support this development, acknowledging that Winn has applied for local HOME funding from the North Shore HOME consortium in the amount of $250,000,”  wrote Kimberly Martin-Epstein, the board’s chair, in an October letter to the DHCD.

Predicting 18 months of construction, Winn hopes the building will be complete and ready for leasing in June 2023.