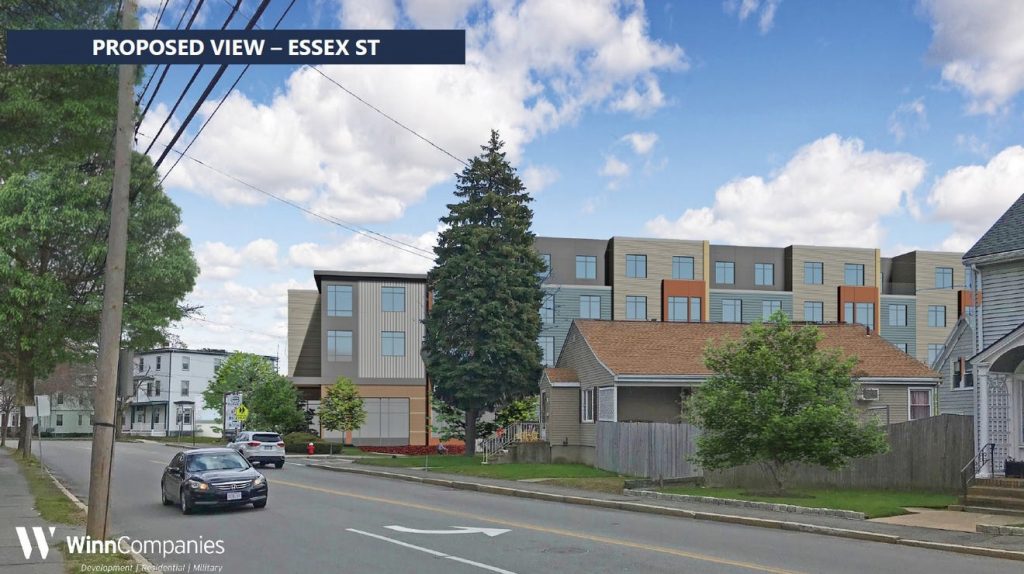 SWAMPSCOTT — A 40B development on Elm Place has been approved by the state’s Department of Housing and Community Development, against the wishes of the Select Board.

As proposed by Boston-based WinnDevelopment, the five-story building would include 128 rental units, 64 percent of which would be income-restricted. Swampscott currently has 3.7 percent affordable units, well below the state-mandated minimum of 10 percent.

“I think the board understands just how frustrating this is, given the extensive concerns that we’ve presented to DHCD in the letter that outlined our opposition,” said Town Administrator Sean Fitzgerald in Thursday night’s Select Board meeting. He was referencing a letter the board sent to DHCD in February recommending that the project not be approved. “We’re one of the most densely settled communities in the Commonwealth and to have a project like this roll in at this size really is frustrating. This has disproportionate impacts on our neighborhood and our infrastructure.”

The February letter outlined several concerns about the project, notably that it would be the densest number of residential units in the town, its height above any other structure in Swampscott, its lack of parking, and its location in the way of an intended extension of the Swampscott Rail Trail.

Fitzgerald said in the Select Board meeting that the town is working on finding a consulting firm to help them better advocate against the development.

“This is a significant project, and we’re going to have to really be very strategic,” Fitzgerald said. “I don’t think there’s a linear path that says, this is how a successful outcome will be determined. This really reflects the responsibilities we have as leaders to advocate and negotiate and really support a technical review.”

He added that the town has applied for a grant from MassHousing to support this technical review.

Board Chair Peter Spellios said that since the letter was sent to DHCD more than a month ago, there has not been any communication with Winn.

“They asked very specific questions and heard very specifically from us what it would take,” he said. “It wasn’t specifics as to design, it was specifics as to process to even contemplate getting support. That requires deliberate and transparent open dialogue with the community, and at the pace that’s necessary for good dialogue to happen, not at the pace that the developers decide themselves.”

Winn said in a statement that they were looking forward to moving ahead with the project, and were taking the town’s feedback into consideration.

“We are very pleased that the Commonwealth has approved the project and has clearly illustrated the need to create mixed-income housing at this site,” the statement said. “We also take very seriously the community feedback we received early in this process and we have been working to update our initial proposal where possible. We look forward to sharing those improvements and to working with all parties to commence this important community development.”